Here it is. The doll that's been frustrating collectors since December. We'll have to be frustrated a little longer I'm afraid. No definate word yet on where these dolls will be sold. Could be KB Toys or Toys R Us or both.

http://cgi.ebay.com/WIZARD-OF-OZ-WINKIE-GUARD-KEN-doll-and-Winged-Monkey_W0QQitemZ330103944897QQcategoryZ36535QQrdZ1QQcmdZViewItem
Posted by Sharon at 3:16 AM 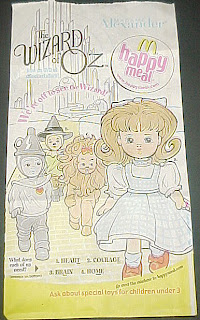 Characters on hand vary from location to location. Prices and availability depend on location, ownership, and volume of business at various restaurants. During week 1 of hte promotion many stores only offered dolls 1 Dorothy and 2 Glinda. Some collectors have been allowed to purchase entire sets at more high traffic locations. Dolls are priced from $1.00 - $2.49 plus applicable sales tax. 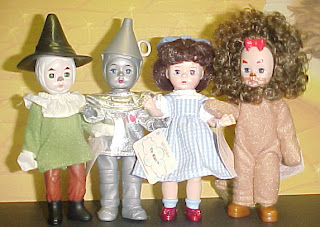 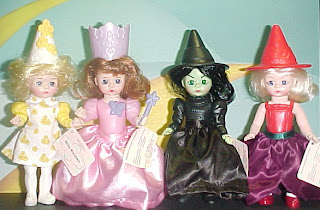 The 5" - 6" Happy Meal Toys are fine replicas of their larger counterparts. The dolls are plastic and cloth with rooted hair. They bear the hallmark Alexander doll faces and sleep eyes with four points of articulation so dolls can be posed. Each individually packaged doll wears an indentifying wrist tag. These charming dolls are very well done and not much detail is sacrificed for their small size. The Wicked Witch even has green eyes! They are well worth the minimal price especially considering the full sized dolls retail for $60 - $125. Easter is just around the corner and the dolls would be great for Easter baskets.
So tap your heels together 3 times and think to yourself 'There's No Place Like McDonalds' to pick up your Madame Alexander dolls today.
Posted by Sharon at 6:19 PM


McDonalds sometimes sells boy toys and girl toys in their Happy Meals. The Wizard of Oz promotion is for the girls while the Teenage Mutant Ninja Turtles are the suggested boy toys. Be sure to specify when you order.

For restaurants that aren't stocked with the entire set the release schedule may be like this:


The promotion runs from March 23 until April 19th or while supplies last. Due to the popularity of these toys, I suggest checking in with your local McDonalds often. 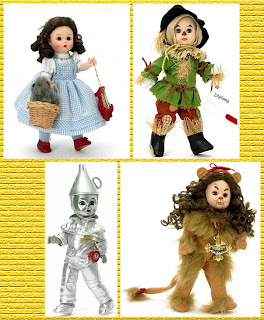 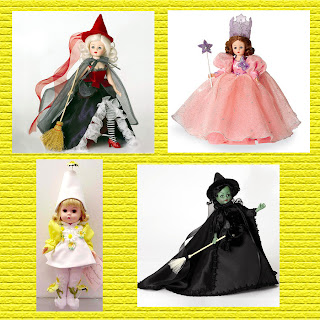 Anyone interested in purchasing any of the larger dolls please contact Karen Owens
http://www.wizardofozland.com/madamealexander.php
Posted by Sharon at 5:53 PM

http://www.mcdepk.com/happymeal/hirez.html
Posted by Sharon at 1:56 AM

Apparently they have recently acquired a prop from which small pieces will be used for prop cards. Artist Darla Ecklund who did sketch cards for series 1 has been removed as an artist for series 2.

Word on the sketch artist message boards were the release date would be March 31st. As of this writing I do not know if the new prop cards will affect the release date.
Posted by Sharon at 9:46 PM

Look for high res photos to appear soon.
Posted by Sharon at 2:06 AM

Mickey's Off to See the Wizard! 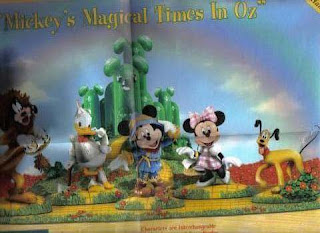 http://madamealexander.com/mcdonalds.php
Posted by Sharon at 7:13 PM


Hybrid tees has created a line of fashionable Wizard of Oz shirts in vibrant colors for girls and Jrs. The Jrs. sizes are available now at Kohls and Sears. The girls shirts will be at Kohls and some Targets in the near future.

The Jrs. Kohls shirt has a distressed look with the Wicked Witch of the East's feet under Dorothy's house with the Wizard of Oz logo and Glinda's famous warning "Be Gone! Before someone drops a house on you too." The shirt is accented with soft rainbow hues making a perfect casual look for spring and made with fabric that feels luxurious against the skin. 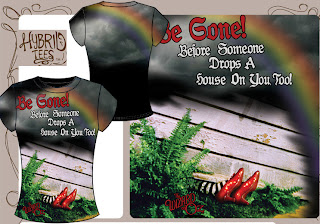 Shirt can be found in Kohls Department Stores or at Kohls.com
http://www.kohls.com/products/product_page_vanilla2.jsp?PRODUCTfolder_id=428995005&prtID=pfx&src=k22350&cm_mmc=Performics-_-DataFeed-_-I-search%20(Froogle)-_-DDI%20Link


Sears carries a variant of the Be Gone shirt with striking red & glittered features. 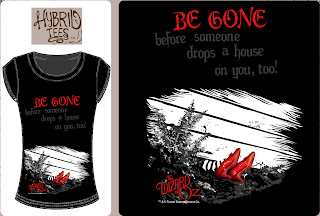 A second style at Sears is emblazoned with everyones favorite emerald complexioned villainess (or with respect to Wicked fans...perceived villainess) striking an ominous pose in a bold green color with her menacing threat "I'll get you my pretty and your little dog too.' Both of these tops can be found in stores or online.
My Pretty
http://www.sears.com/sr/javasr/product.do?pid=002AM123000&vertical=Sears&BV_UseBVCookie=Yes

A design of the Wicked Witch in flight should be on retailers' shelves soon. 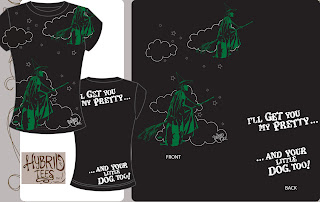 Look for these girls styles soon in a Kohls or Target near you. 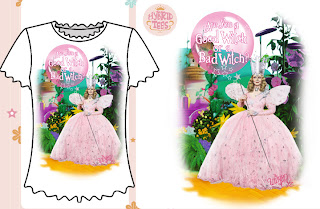 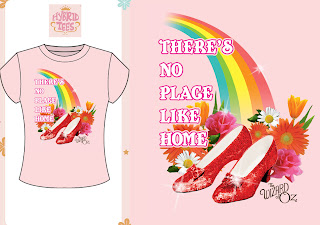 More expected this summer. I'll do my best to keep everyone appraised of new styles and where they can be found.
Posted by Sharon at 5:18 PM 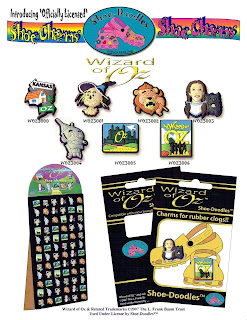 Contact Karen Owens for pricing and ordering info. storylandmi@aol.com
Posted by Sharon at 4:07 AM

A rep from Cumberland House Press has informed me that the release date for Short & Sweet: The Life and times of the Lollipop Munchkin by Jerry Maren has been pushed back to the fall. No reason was given for the delay.

Two new editions of The Wonderful Wizard of Oz 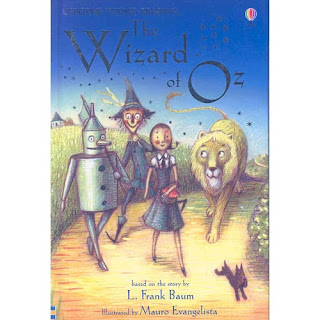 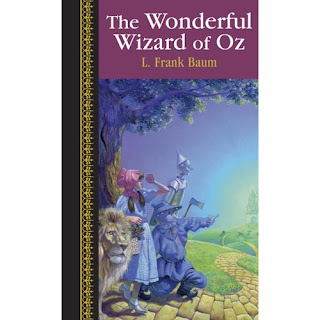 Joshua P. Dudley's debut effort Lost in Oz will receive the graphic novel treatment starting late spring. Info on the novel can be found at http://www.lostinozbook.com/
Look for a review in a forthcoming issue of The Baum Bugle. Check out these links for additional info.
http://www.lulu.com/content/604153

The Dorothy comic still publishes periodically. They have just released issue 7. Be sure to check their website regularly for updates. http://www.dorothyofoz.net/

And last for today is the new hardcover edition of Ozoplaning with the Wizard of Oz by Baum successor Ruth Plumly Thompson. This book is loaded with new features and boasts a glorious cover illustrated by Eric Shanower.
http://www.hungrytigerpress.com/books/ozoplaning.shtml

I try to limit my book collecting to different versions of The Wonderful Wizard of Oz (though I do stray occasionally) and in that I don't read very many Oz books other than what's written by the Baums ( L. Frank and Roger) or books about the MGM movie. However, I know a lot of ozphiles that are avid readers of anything Oz. If anyone cares to offer a critique of any Oz books, I'd be delighted to post your thoughts.
Posted by Sharon at 4:30 PM 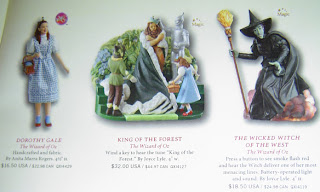 Three new Oz ornaments for us this year!

Wicked Witch of the West Magic Ornament is 4" tall and holding her broomstick. The smoke at her feet flashes read and she speaks a line from the movie. She is $18.50

Look for these at your local Hallmark starting July 14th.
Photo courtesy of Els Garcia
Posted by Sharon at 10:21 AM