It is with great pleasure and pride that we are able to reveal the playfield artwork today for our Wizard of Oz Pinball Machine.

This has been in the works since last July when Greg Freres along with Keith Johnson started getting into the rules of the game.
Jack would love to say that we did not lose time in the playfield artwork approval process but we probably lost a few weeks in the back and forth but it was worth the result.
Jack is quoted "The approval process has taken several weeks and the result was well worth it. We do not believe in cutting and pasting already existing artwork from a licensor and slapping it on our Pinball Machines. Greg has tirelessly worked to create this with passion and if I hired any old artist we could have had playfield artwork completed last July. Greg is, in my opinion, the best pinball artist of today because of the time he takes, his talent and his passion for pinball and we are truly proud of his work."

Welcome to the long-awaited WB-approved playfield art for the Wizard of Oz. I've read so many posts over the past couple months and understood the pain y'all were going through. I was inspired by many of your posts when you first saw the castle playfield so thanks for helping me get through the last stages of the design process. I am still not used to having so many people be so aware of a project...it's been a bit unnerving to say the least.

When we first started the project there were two major elements that I used as the springboard - the fact that we were going to use "hand-drawn" artwork and the idea that the playfield was somehow divided between the Good Witch/Bad Witch sides of the storyline. And when Joe's design started coming to life and there really was a nice division between the two sides this was a great starting point to think about how the art would also be divided.

I'll have more to say in the near future about all the background that went into the steps I took to get this where it is today but one of the things when dealing with a license is working within the constraints and limitations they provide. With that said, I can honestly say this is a combination of hand-drawn and photo related elements to remain true to the licensor's requests. My goal was to create as much visual unity or continuity between the design elements so the end result was one flowing piece of art.

The great thing about this playfield is the organic layout that Joe has created with the myriad of shots. Since my last commercial game, Revenge from Mars, I had become accustomed to working with the "fan" style layout which can be somewhat easier for an artist to work with. I think my work on WNBJM was a good warm up for this layout because, it too was more organic in its design approach.

One of the visual anchors for this layout, the spiraling Yellow Brick Road, was one of the first elements I created to get the design process started. Interestingly enough, the placement of the Wicked Witch at the bottom came along later in the development but it made sense immediately because of the Ruby Slipper Flippers. She's gotta' get those shoes!

Now that the suspense is over, I hope you enjoy the look and feel of this piece. Don't forget you are only looking at one piece of the puzzle - there are a lot more visuals that make a playfield a cohesive unit and I too can't wait to see all of Matt's dimensional elements push this over the top. Once the game is together we are sure the entire package will become an entertaining trip down the Yellow Brick Road. Cheers, Greg

There are still many surprises to reveal as the assembly of the game moves forward. The plan is to have a game on a public location in May. More to follow. 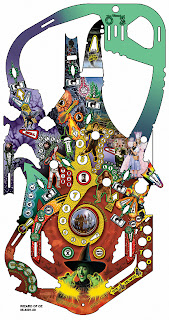 Click here to Pre-Order The Wizard of Oz Pinball Machine

We are releasing another piece of Animation created by our extremely talented Graphic Designer, JP DeWin. This is one of several animations which in various forms and at various times will be incorporated into game play and into the game rules.


These animations will be shown on the 26" Wells Gardner commercial LCD monitor in the backbox and will be accompanied by custom speech, custom music and sounds over the booming stereo sound system of the game.  They are designed to entertain onlookers, instruct the player and amuse everyone.


If you like this one, all we can say is "you ain't seen nothing yet" as John-Paul is cooking up some great treats in his studio.


We don't want Matt to feel lonely this week as he models his way through all of his toys and designs. His "Rainbow Flower Field" is pictured which resides above the Rainbow Targets.

The picture of the Munchkinland playfield with the latest house shown without the applied artwork and in the "landed" position on top of the feet of the Wicked Witch of the East. There is also some artwork on the playfield and some blurry faces which will be exposed at a later time. 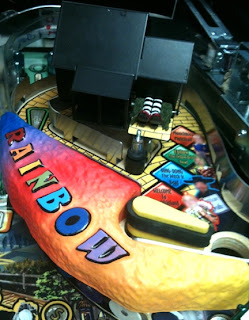 JP is still hard at work creating the animation for the LCD. People are asking for a bit more of them so we go to the characters in a "Happy Dance" that will be used as an element of a larger award screen. The video below is a small example of how JP captures scenes from the movie, and is able to customize how the characters move and interact on the screen based on different situations during game play. 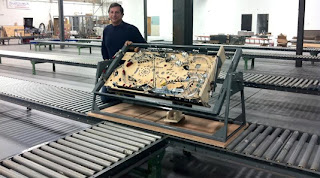 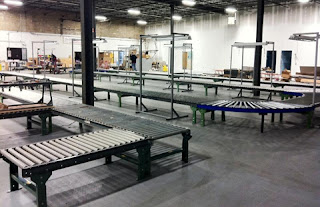 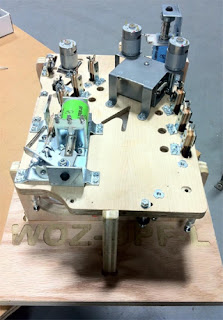 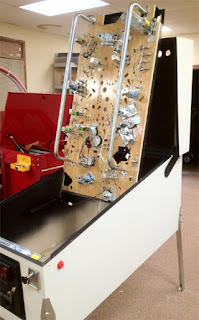 In reality, many aspects of the game are already in production. That is thousands of parts, assemblies, cabinets, and related items. One thing not in production yet is our playfield as we are waiting for some approval of aspects of the playfield artwork. Our playfield manufacturing company is ready to go chomping at the bit (literally) to begin that shortly.
The first batch of cabinets are in the completion process and we will show them in the next update but below is a link to the raw wood being cut for our cabinets.

We have been asked to show the Winged Monkey Mech and Dorothy's Spinning House which we are doing today. Both shown are not the completed versions but will give you an idea of what they will be. All of the motors and mechs in the game are 12VDC and all feed off of our JJP proprietary I/O Board. 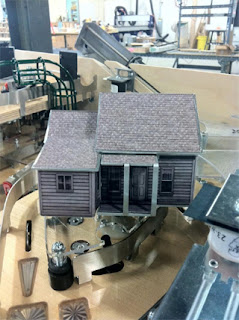 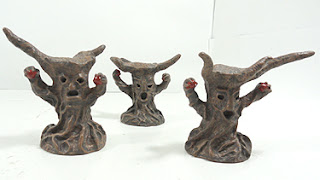 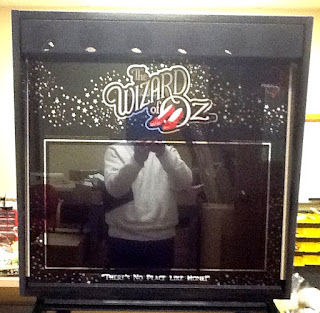 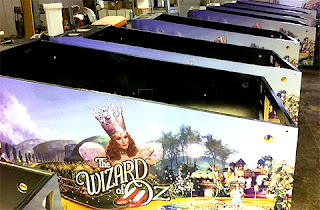 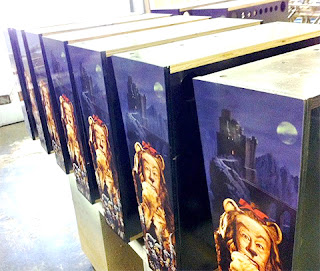 The Man Behind the Curtain
Magic Ornament  - lights up and Dorothy & Wizard speak
$34.95 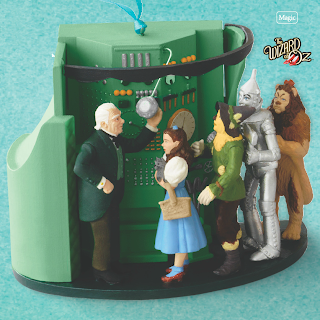 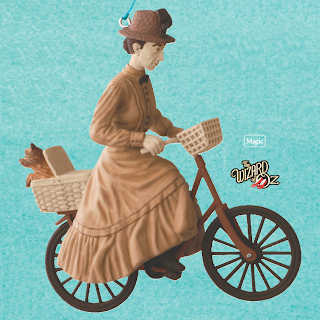