The modern Dorothy, Miss Dorothy Gale, will be available this month. The vintage Dorothy, Glinda, and Wicked Witch of the West will follow around the first of July. You can see Miss Dorothy Gale here:
http://curiozitycorner.blogspot.com/2010/02/2010-barbies.html

Click on photos to enlarge.
Posted by Sharon at 2:24 PM 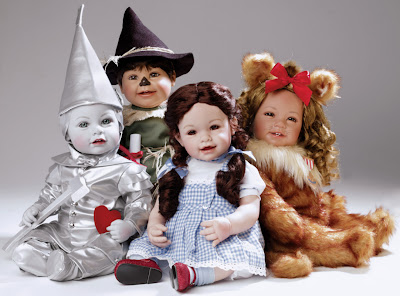 From somewhere over the rainbow comes a cast of characters

like you have never seen…Wizard of Oz™ Adora dolls

, : California-based designer, developer, and marketer of award-winning dolls, Adora, announced today that it has launched an officially licensed collection of Wizard of Oz™ dolls, through a license agreement with Warner Bros. Consumer Products. The collection will make its debut to wholesale buyers at the Dallas Gift Mart, June 23rd - 29th and the Atlanta Gift Show July 14th - 21st. Shipping to retailers will begin in early September 2010.

The Wizard of Oz is one of the most beloved and iconic motion pictures of all time filled with timeless sentiments and values cherished by multiple generations. Originally released in 1939, more than one billion consumers have experienced the classic story of Dorothy and friends in the Land of Oz. The Adora Wizard of Oz™ introductory collection of 20” vinyl dolls of Dorothy, Tin Man, Cowardly Lion, Scarecrow, Glinda and the Wicked Witch are age-graded for doll enthusiast’s ages six and up.

“We are especially proud of the Cowardly Lion,” says Peggy Vicioso, VP Marketing & Product Development for Adora. “You can imagine our excitement when upon sending the Cowardly Lion sample to Warner Bros for product approval and the approval was granted saying, ‘The best Cowardly Lion we have ever seen!’.”

The dolls were sculpted in the Adora studio and capture the facial characteristics of each beloved the character as a toddler, they are all easily recognizable and endearing. All Adora dolls are made in a fine collector quality vinyl with soft-sculpt weighted bodies and life-like hair. Each one has been hand crafted, one-by-one with meticulous detailing, each endearing face has been hand painted and each costume individually sewn.

Adora is a Laguna Hills, California-based designer, developer, and marketer of award-winning dolls. The Company’s products can be found in specialty retail stores throughout the , and various catalog merchants. www.charismabrands.com

Warner Bros. Consumer Products, a Warner Bros. Entertainment Company, is one of the leading licensing and retail merchandising organizations in the world.

THE WIZARD OF OZ and all related characters and elements are trademarks of and © Turner Entertainment Co.

Glinda and the Wicked Witch are still pending approval. Photos available soon. Dorothy will be accompanied by a plush Toto. The dolls will start arriving at retailers mid-September. Suggested retail price is $119.95 each. Click on photo to enlarge.