There's also some markdowns on Oz items so be sure to have a look around.
Posted by Sharon at 5:38 AM


Bit of exciting news from Bradford Editions. If the ornaments are half as good as the ad....Wow!
Click on the photos to enlarge. Photos courtesy of Robyn Bodine. 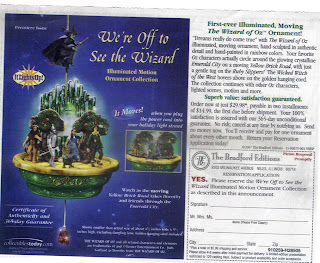 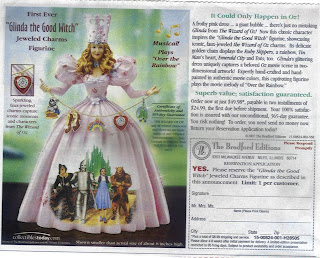 Wizard of Oz Jewelry from the Bradford Exchange

This was just too cute for me not to post right away. Wizard of Oz pet costumes! Much to the chagrin of pets everywhere, I think these will be a big hit.

http://www.rubiesworldwide.com/catalogs/a56_proof/full_jpgs/203.jpg
Posted by Sharon at 6:07 AM

Today, Hallmark is a mainstay of every day life with greeting cards, wrapping paper, and gifts for every milestone. Hallmark accounts for half of the billions of greeting cards given each year. It's hard to imagine the Goliath of the greeting card industry came from rather humble beginnings almost a century ago.

Eighteen year old J.C. Hall began with two shoe boxes of post cards in 1910. He only received payment for a third of what he distributed, but apparently that was enough to start what would eventually become a monumental empire.

The company was named Hall brothers in 1915 after Rollie Hall joined his brother and became instrumental in creating cards and gift wrap as we know it. Postcard sales were on the delcine and Rollie felt there were possibilities for higher quality Valentine's and Christmas cards mailed in envelopes. Two years later, shortly before Christmas, Hall Brothers ran out of the colored tissue they used for wrapping gifts. Unwilling to disappoint their customers, Rollie searched the product plant for a suitable substitute where he found beautifully decorated envelope linings from France. Shoppers enthusiastically snapped up the envelope linings that year and the next. After selling out of the linings two years in a row, the brothers took it upon themselves to design and print their own gift wrap.

In 1928, the newly christened Hallmark, (though the name wouldn't be officially changed until 1954), became the first greeting card company to advertise nationally, running an advertisement in Ladies' Home Journal written by J.C. Hall.

The year 1932 saw Hallmark's first licensing agreement with none other than Walt Disney. Charles Schultz's beloved Peanuts characters appeared on Hallmark cards in 1960. To date, Hallmark has agreements with 7 of the top 10 leading licenses for characters and entertainment properties.

Hallmark changed Christmas decorating for the better with the introduction of their Keepsake Ornaments in 1973. Hallmark's first Keepsake Ornament Collection consisted of six glass ball ornaments and twelve yarn figures. This year Hallmark introduces scores of new ornaments including traditional icons such as Santas and angels; favorite childhood toys and dolls; and pop culture characters from Barbie to Peanuts to Disney to Harry Potter and of course The Wizard of Oz.

The Wizard of Oz ornaments started as a set of four in 1994 with the collection growing by leaps and bounds as time goes on. This year Hallmark added 5 new introductions; Dorothy Gale, King of the Forest, The Wicked Witch of the West, Toto's Great Escape, and Trick or Treating in Oz.

As Hallmark's centenary swiftly approaches, we can surely expect greater innovations and hopefully among those, more Oz!!


****Thanks to Karen Owens, Jim Whitcomb, and Robyn Bodine for contributing into and photos used in the following entries****
Posted by Sharon at 6:50 PM

Wizard of Oz 'Stand Up Story for you Because You're Special' Circa 1966 softcover 10 page storybook with three stand up scenes. 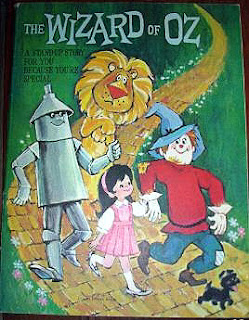 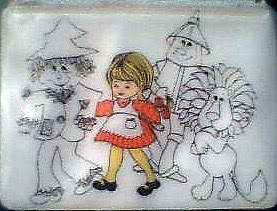 Late 1970s Hallmark King Size Pop-Up Edition of L. Frank Baum's The Wizard of Oz. Retold by Edward Cunningham with charming illustrations by Pat Paris. Multi-dimensional pages and action surprises by Dick Dudley. "More Story, More Pages, More Pop-Up Fun Than Ever!" Hardcover with 5 pop-ups. Personally, this is one of my very favorite Oz books ever. Many moments of childhood contentment were spent flipping through this book. 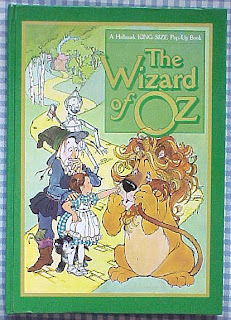 In the early 1980s, Hallmark's puzzle division Springbok put forth this engaging 100 pc. boxed puzzle of the characters from The Wonderful Wizard of Oz 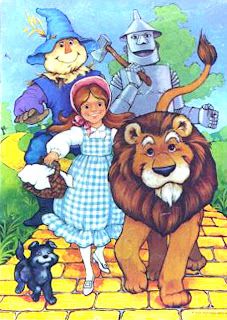 In 1989, many companies reveled in the 50th anniversary of the MGM film. Hallmark created a plethora of greeting cards for any occasion that featured characters and scenes from the movie. Many of the greeting cards could still be found in Hallmark stores well into the 90s. 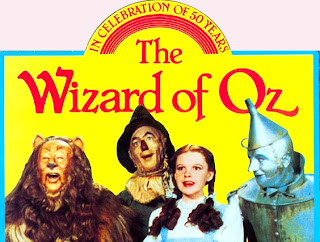 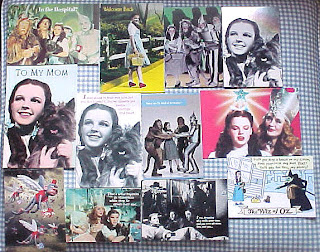 For 1993, Springbok returned to the Land of Oz using the MGM movie as inspiration . The mammoth 2000 pc. boxed Follow the Yellow Brick Road Puzzle is a stunning collage suitable for framing. 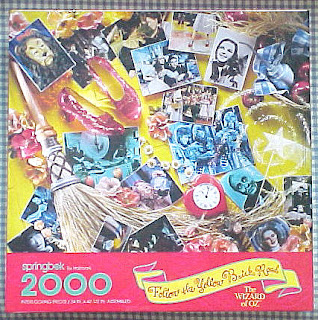 Hallmark Keepsake Ornaments introduced the first four Wizard of Oz ornaments for the 1994 holiday season. Due to the popularity of the debut set (much to the delight of Oz fans), Hallmark has added on to the ornament line every year since. In addition to the regular line ornaments, Hallmark offered two ornaments sold only through the Keepsake Ornament Collectors Club, a tablepiece, a limited edition ornament, and Halloween ornaments. Shown below is the original set sculpted by Trish Andrews, Duane Unnuh, and Joyce Lyle. Also shown is the Wicked Witch background used to showcase the Wicked Witch and Emerald City ornaments for 1996. 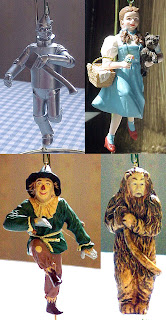 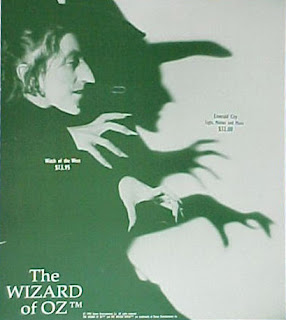 The same people who collaborated on the 1993 puzzle, again teamed up for the lavish 1995 calendar. Hallmark later produced lesser quality calendars for 2000 and 2001.

Around this time Hallmark and stores that carried Hallmark merchandise offered reward stickers. 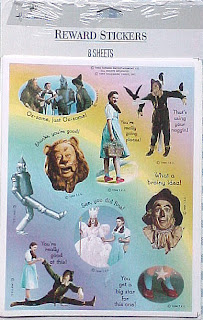 Harper Collins published The Wizard of Oz by L. Frank Baum with a green velveteen cover exclusively for Hallmark in 2000. This 199 page volume sadly lacks illustration. 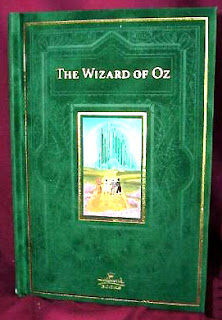 Also in 2000 a Oz lunchbox was added to Hallmark's School Days Lunchboxes line. The tin lunch box complete with thermos was 3/4 scale and was limited to 19,500 pieces. 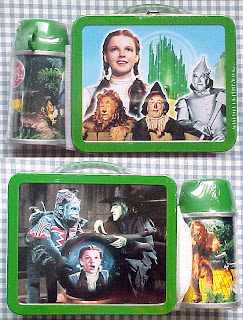 Pictured in the 2006 Dreambook but not available for purchase until October the Hallmark Keepsake Christmas Table Decoration I'll Get You My Pretty is a three dimensional scene with motion, lights, and sound that re-enacts The Wicked Witch's frightening appearance in Munchkinland. 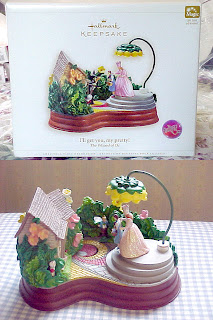 Hallmark is certainly keeping Oz collectors busy this year. I imagine a lot of mom's received the first Wizard of Oz card with sound. A week before Mother's Day the Oz card was scarce. Upon opening the card you hear Billie Burke proclaim "There's No Place Like Home." Very appropriate for the intended holiday.

Four new ornaments were released during the Keepsake Ornament Premiere in July. Dorothy Gale, King of the Forest, and the Wicked Witch of the West were added to the main line. 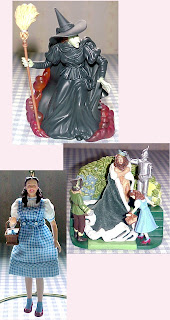 The limited edition premiere exclusive ornament, Toto's Great Escape, proved to be very popular with many stores exhausting their stock the first day of sale. 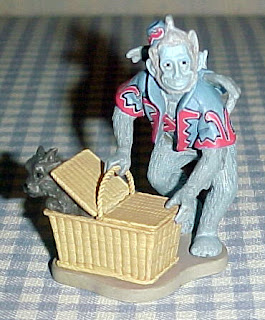 Birthday cards by Hallmark Connections are available at Walmart stores in the Midwest. There is a card of the Cowardly Lion in addition to what is shown. Another foil card of the four friends on the yellow brick road was found at a Midwest Walmart. A blank die cut ruby slippers card is now sold at Hallmarks everywhere.

Trick or Treating in Oz
As excited as I was to see these online in February, nothing could prepare me for seeing them in person. Photos do not do this set justice.
Trick or Treating in Oz is a set of Looney Tunes characters masquerading as the Wizard of Oz foursome in pursuit of Halloween treats. Bugs Bunny, never one to shirk from sporting a dress and a wig, is Dorothy, Sylvester is the Scarecrow, Taz is the Cowardly Lion, and Tweety is the Tin Man.
Sculpted by John "Collin" Francis and Nello Williams, the details on these are amazing. The Cowardly Lion's curled mane and Bugs Bunny's hair are perfect. The glittery accents on each piece make them even more endearing. I daresay I like these ornaments 10 times more than the Oz mainline Christmas ornaments for this year. Though, they do come with black string for hanging, the ornaments are able to stand alone for shelf display.
This set is a bargain for $16.50. I keep hearing they are miniatures. They are not full sized ornaments, but they are larger than I expected. The individual Oz miniatures are Munchkin sized compared to the Looney Tunes and were more expensive at $7 each. You do the math.
This set will have major crossover appeal. The fans of Oz, Looney Tunes, Hallmark, cartoon, and movie memorabilia will want to add this set to their collections. I'm sure many casual Hallmark shoppers will succumb to the charm of this set and make an impulse buy.
Bear in mind, these are Halloween ornaments and so the availability will be limited to the Halloween season. I expect Trick or Treating in Oz will be a huge seller. Bravo, Hallmark for this ingenious set!!
Bugs is shown below with the miniature Dorothy from 2005 for size comparison. 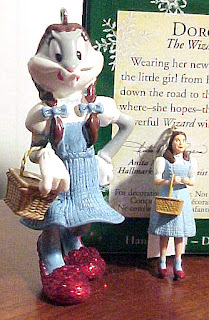 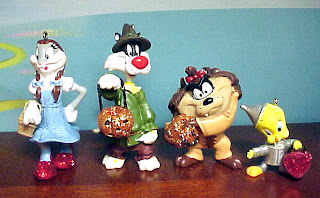 With four more months left to go, who knows what else Hallmark has in store? Please keep checking The Curiozity Corner for the latest news.
Posted by Sharon at 5:12 PM

Fairy Tales who is selling the darling Wee Forest Folk Wondeful Wizard of Oz Mice is now selling a limited edtion print to compliment the set. Thanks to Jim Whitcomb for the heads up.
http://fairy-tales-inc.com/Litho.html 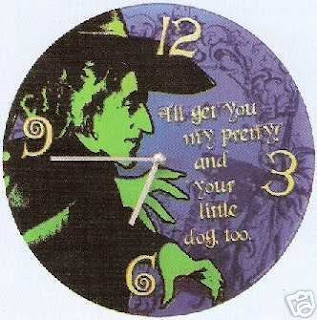 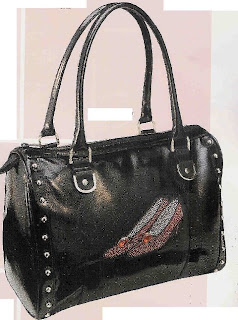 I am still working on a large Hallmark entry that I hope to have up in the next few days. It's also possible that Tonner may have yet another Oz release exclusive to FAO Schwarz. Word is there will be another Wicked waterglobe this year. I'm sure there will be many other Oz surprises in store before the year is out so please stay tuned and I'll do my best to get the info out.
Posted by Sharon at 3:04 PM